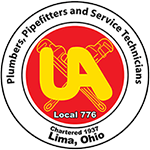 Wally was a pipefitter with Local Union 776 for 28 years. After which he purchased a Comfort Keepers franchise in 1999 and retired from that in June 2019 to pursue his favorite role as a son, father, grandfather and great-grandfather. His hobbies included golfing, bowling, fishing, shooting pool, cooking, woodworking and entertaining everyone. He was truly a “jack of all trades”.

He was a graduate of Shawnee High School, Class of 1968. He proudly served his country as a member of the US Navy during the Vietnam era. He was a member of the Westside United Methodist Church, American Legion Post 96, VFW Post 1275, Eagle’s Aerie 370, Elks Lodge 54, Moose Lodge 199, Lima Lodge 205 F&AM, the Board of Senior Citizens and was an Eagle Scout mentor. Wally was never without a smile and a quick witted ornery joke. He never met a stranger and there was never a dull moment when he was around.

He was preceded in death by his brother Marc A. Kincaid; son-in-law Jim Hickman; brother-in-law Jerry L. (Carol) Clum, Sr.

The family will receive friends from 2:00 PM to 8:00 PM on Thursday, February 10, 2022 at CHILES-LAMAN FUNERAL & CREMATION SERVICES, SHAWNEE CHAPEL, where masonic services will be held at 7:00 PM.

Funeral services will be held at 10:00 AM on Friday, February 11, 2022 at CHILES-LAMAN FUNERAL & CREMATION SERVICES, SHAWNEE CHAPEL, with Pastor Dan Lee, officiating. For those unable to attend in person, the service will be live-streamed on the funeral homes Facebook page.

Entombment will be in the Memorial Park Mausoleum immediately following the services at the funeral home. Military honors will be performed by active duty members of the US Navy and the VFW Post 1275 Honor Guard.

Memorial contributions may be made to the Alzheimer’s Association, St. Rita’s Hospice or to the charity of the donor’s choice.

Online condolences may be expressed to the family at www.chiles-lamanfh.com